For the results of the analysis, please check the following infographics. 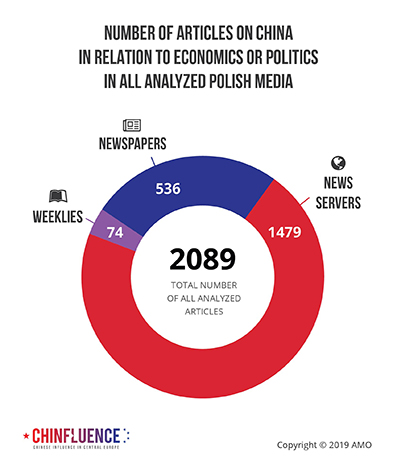 Intensification of Sino-Polish relations contributed to the increase in coverage of China-related topics, with a special emphasis on highest-rank official state visits.

In 2011, when a Strategic Partnership agreement was signed in Beijing by Polish president Bronisław Komorowski and Chinese President Hu Jintao, nearly 300 articles were published on China in connection to economy or politics (out of which 170 were devoted either to the agreement, or to the visit – or both). In 2012, the year of the visit of Chinese Premier Wen Jiabao in Warsaw, where he announced the “16+1” initiative, a similar intensity of coverage, with as much as 104 texts referring to the sole visit, was found. The peak (351 outputs in total) occurred in 2015, when Polish President Andrzej Duda presided over an official delegation during CEE-China summit as the only head of the state among the remaining 16 prime ministers. In 2016, only slightly smaller number of articles on China appeared in the Polish press selected for the analysis. It was the year of Chinese President Xi Jinping’s visit to Warsaw, and the time when Poland joined China-proposed Asian Infrastructure Investment Bank (AIIB). A slight decline of the number of outputs continued in 2017, the year of Prime Minister Beata Szydło’s attendance at the One Belt One Road Forum for International Cooperation in Beijing. Going deeper into the analysis, it has to be noted that since 2015 the overwhelming majority of mentions was related to the One Belt One Road (OBOR or New Silk Road or Belt and Road) project, which was generally perceived in Poland as an opportunity to developmentally leap forward and boost Sino-Polish economic relations. The first half of 2018 demonstrated quite a substantial diminution in numbers of articles (only 64 were published in total). Interestingly, Deputy Prime Minister Jarosław Gowin’s visit to the “16+1” summit in Sofia was not ranked among the top key subjects covered by Polish media at the time, proving the pattern that only highest-rank delegations enjoy maximum coverage. 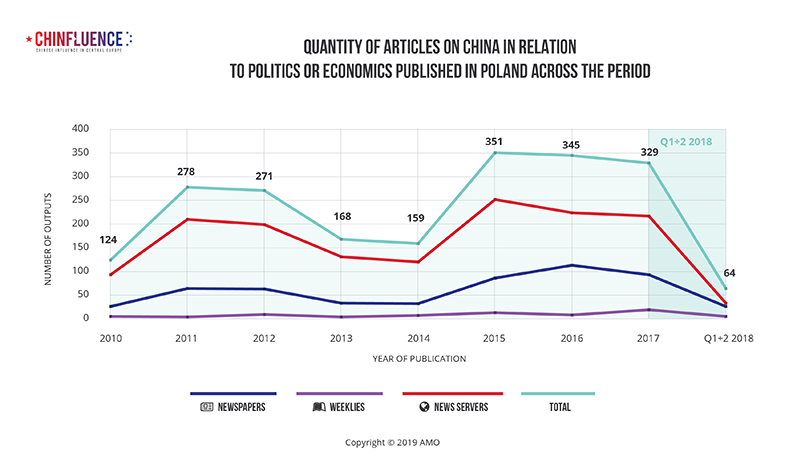 Topics regarding Sino-Polish economic relations (also in the framework of international formats, such as the Belt and Road Initiative, or 16+1 platform) and China’s economic and investment presence in Poland prevailed in the media coverage. The analysis unveils the existence of very high expectations regarding the impact of China for Polish economy, downplaying other aspects of this cooperation. A visit of Jia Qinglin, Chairman of the National Committee of the Chinese People’s Political Consultative Conference, to Warsaw illustrates this tendency very well: the coverage focused mainly upon opportunities for lucrative contracts at a governmental, regional and business levels. The controversies the visit arose (accusation of crimes of genocide and torture of practitioners of Falun Gong in China) were mentioned by only few media outlets. 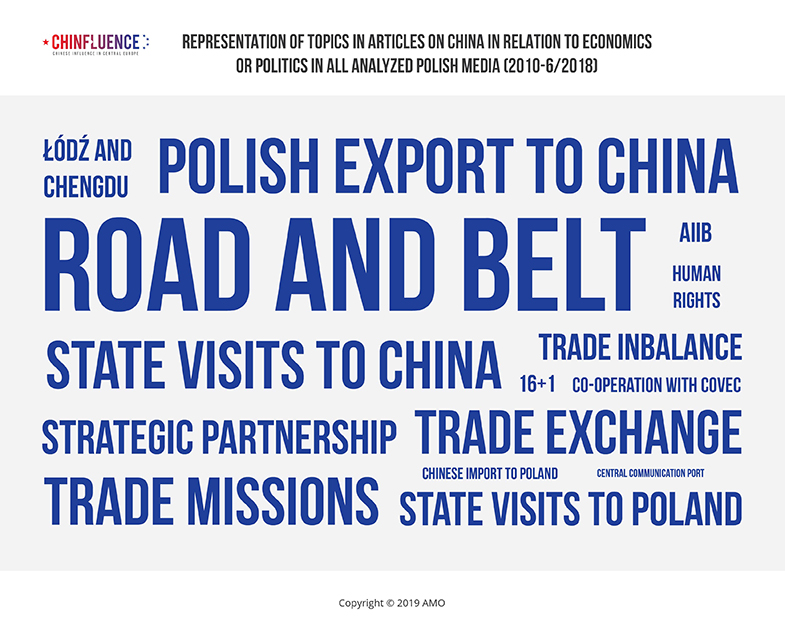 Although human rights in China made it to the top 15 key words covered by the Polish media selected for this analysis, it is not the highest rating in a country which, according to Chinese experts, has had a reputation of being more eager than average to “lecture China on democratic standards”. Indeed, an offer to share Polish experience with the Middle Kingdom (if it decides one day to “pluralize its political system”) was expressed in the annual exposé of then Polish Minister of Foreign Affairs Radosław Sikorski the very same year the Belt and Road initiative was launched. In turn, president Bronisław Komorowski – straight after his ground-breaking visit to China in 2011 – stated that it was “economic cooperation that should be the focus, as free market and property rights open the way to the rule of law”. By and large, also in the media coverage human rights were overshadowed by hopes for economic profits from Sino-Polish relations. Interestingly, the topic found its second popular position in the Polish discourse in the year 2013, mainly in the context of the first official visit of the speaker of the Seym, Ewa Kopacz, to China on June 4, the 24th anniversary of the Tiananmen Square massacre. The date was considered misfortunate by some commentators, who even described it as an act of “selling dignity for contracts”.

What is worth noticing, security-related issues were strongly underrepresented in the media discourse within the examined timeframe.

While the dominating sentiment of the analyzed media outlets was neutral (58%), as much as 39 per cent of articles were evaluated as positive, and only 3 per cent as negative. 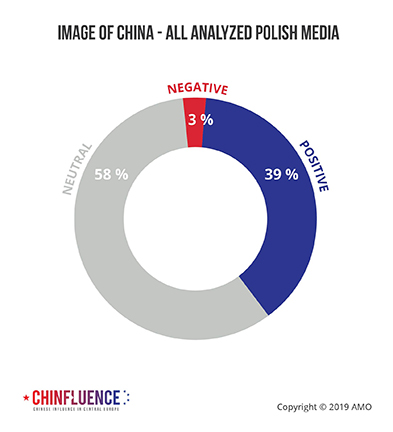 In the comparison with the remaining Visegrad countries, the Polish media discourse was exceptionally positive on China with only occasional negative mentions.

The prevalence of topics evoking potential economic benefits of Poland’s cooperation with China – paradoxically, despite its actual modest outcome throughout the analyzed period, as well as to date – might justify the favorable trend observed in the analyzed articles. Poland has been declaring its interest in receiving Chinese investments in the framework of the Belt and Road Initiative so as to upgrade country’s infrastructure and industries, as well as to attract additional funding to those sectors of economy, where there is no chance to cooperate with businesses from Western Europe or receive European Union funds (which will shrink significantly in the next budgetary framework anyway). There were hopes that the Chinese investment might to some extend supplement EU funds, especially in greenfield and brownfield projects. Consequently, the number one topic of the Belt and Road, which scored the record number of 834 mentions, was evaluated as being presented mostly positively or neutrally, with very sporadic mentions about possible threats the project might bring about. A similar tendency to portray China-related issues in either predominantly positive or neutral way can be observed regarding other key subjects (such as Strategic Partnership, Trade Missions, Poland’s accession to AIIB or “16+1” initiative) identified through the Polish media mapping. 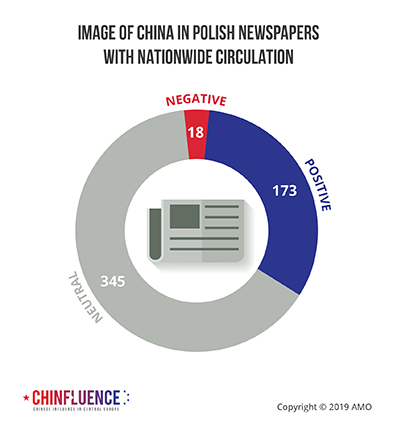 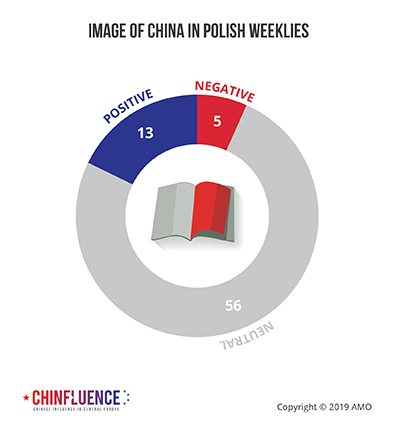 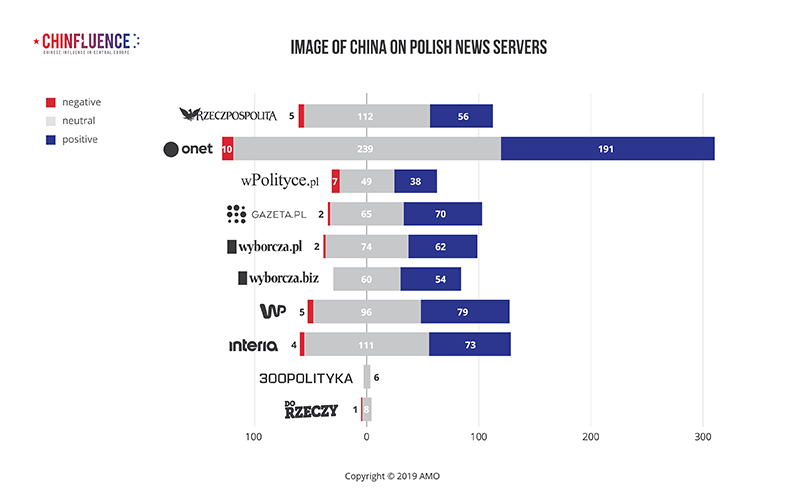 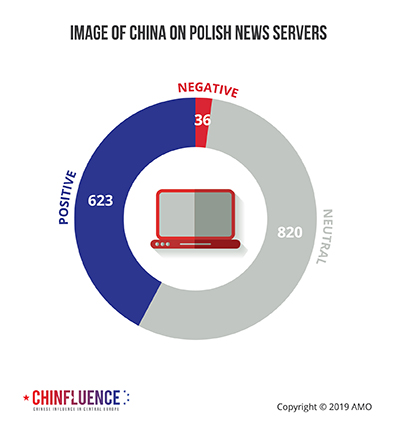 One China under media heaven: How Beijing hones its skills in information operations

We use cookies to help give you the best experience on our website. By continuing, we assume you agree to this. Find out more.